I met my clients in Hillcrest only about 5 minutes drive from my home which was great! They were from South Africa, Cape Town which for me is not common to have South Africans on a Durban safari tour but it was really great fun and the tour was amazing!

On route to the most underrated Big 5 game reserve Hluhluwe Imfolozi national park, I covered lots of the history of Durban, KwaZulu Natal and general things that we saw like the crops of the area etc.

We stopped to stretch the legs on the way up and refuel before continuing the last hour to Hluhluwe Imfolozi game reserve for our Durban day safari tour.

We arrived at Hluhluwe Imfolozi park and began with our game drive to see what animals we could see. We actually didn’t even need to leave the parking lot for our first sighting as there was an Elephant bull drinking near the gate! 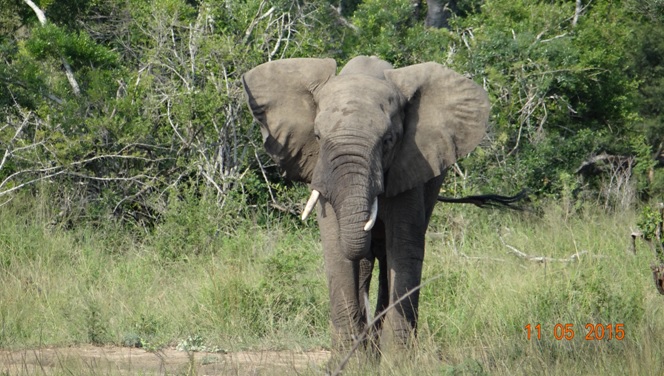 As we continued with our safari from Durban we came across a huge herd of Elephants with tiny babies on the hill near the Centenary center where we would be having lunch later that day. The Elephants seemed to be on some mission as they kept walking very quickly and were heading to the eastern fence line. I had seen three herds of Elephant do this 3 days before which always makes me think they are attending an Elephant funeral or there is a weather change! 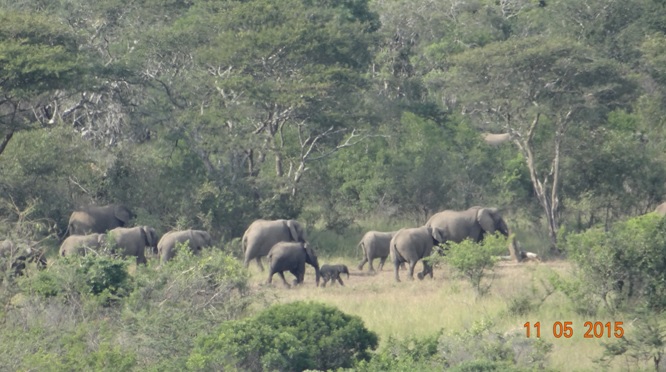 We continued with our Durban day safari in Hluhluwe Imfolozi game reserve and came across a female Impala with thin horns this is a genetic abnormality and could be cause by inbreeding!  This can happen is a male mates with his offspring instead of being ousted from the leadership of the Harem of female by another dominant male.

We also crossed over the Umfolozi river and spotted a Buffalo bull very far away and the photo was not good so I waited till we spotted these Rhino. They crossed the road in front of us and this was a special sighting for my clients and meant we had already seen 3 of the Big 5, Rhino, Elephant and Buffalo. 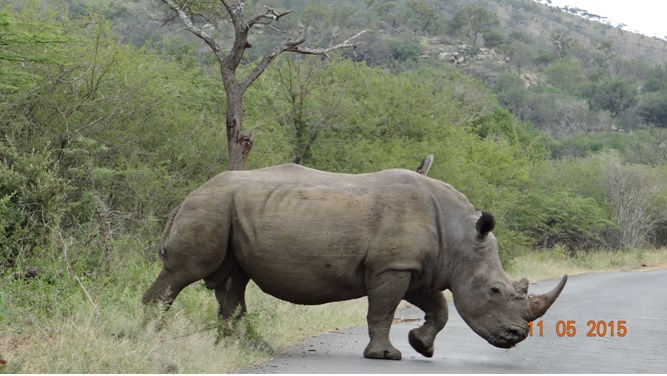 After spending a few minutes with the Rhino we continued with our safari from Durban and we had a quiet patch but I knew that we would see lots of animals. It was not long and we were blessed with a sighting of Cheetah. It was a mother and her 2 cubs around a year old and they were so much fun to watch we must have spent half an hour with them. At the same place was 3 crashes or Rhino which made it even more exciting! 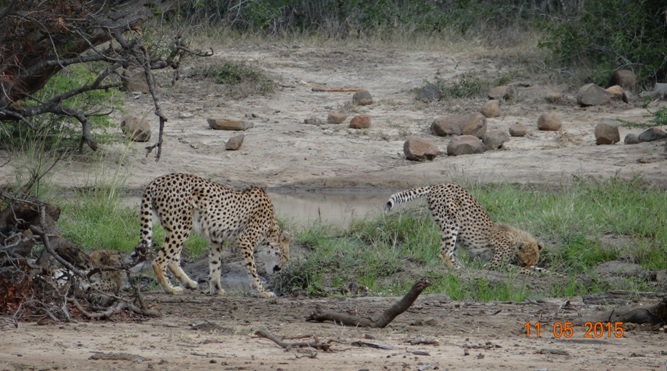 I might have gone over the to with pictures and Videos but it was Cheetah and there were two cubs which we active and running around in an open patch. This was such an exciting moment and we all enjoyed it. What a way to begin your first safari for my clients. 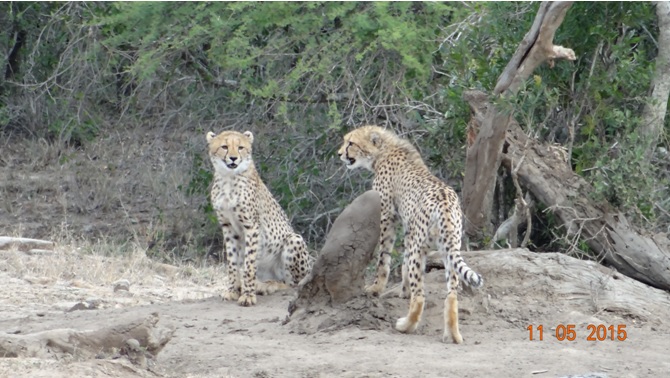 Video – Learn about Cheetahs, seen in Hluhluwe Imfolozi on our Durban day safari

One final picture of the Cheetah playing and I promise no more Cheetah photos or Videos for today! I just couldn’t help myself! They were beautiful! 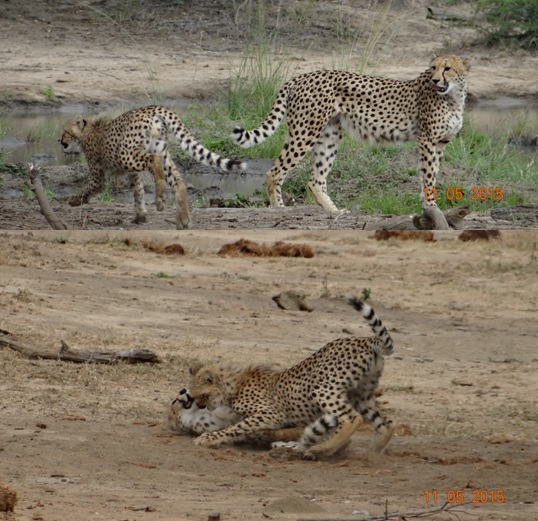 As we continued with our Durban day safari tour I honestly could not have really cared for myself if I didn’t see another animal but I knew I have to see what we could find for my clients as they were only here for a day safari tour. We kept getting lucky and we went round one of the many dirt road bends we stopped as we had some Zebras walking down the road towards us! 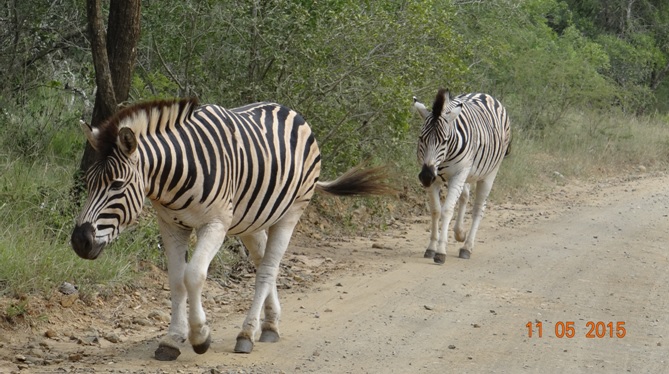 The Zebra were so beautiful and we enjoyed chatting about some of the interesting facts and features of this animal before moving on with our safari in Hluhluwe Imfolozi game reserve and finding a couple of Wildebeest walking on the road! 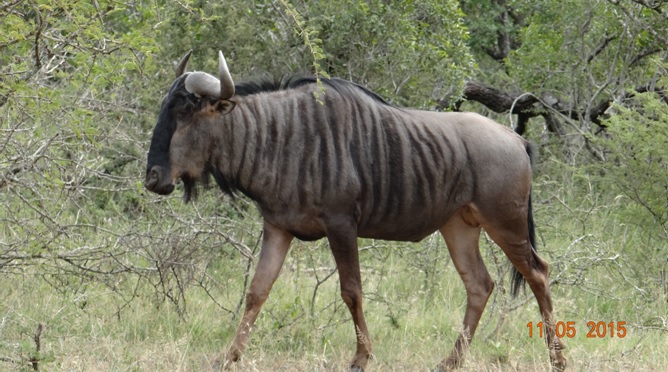 I figured now it was time for a rest room break so I made our way to a picnic site. We arrived at the Sontuli picnic site and we so lucky again! We saw Lions laying down in the river bed. I just could not believe our luck we had now seen 4 of the Big 5 and Cheetah in just a few hours. The best part about these Lions was the structure, it was an Adult male and female with one cub around a year old or a bit less.

It is not often you see these restful cats on a Durban day safari tour or see a big male usually its just the Lionesses and the sub adults. 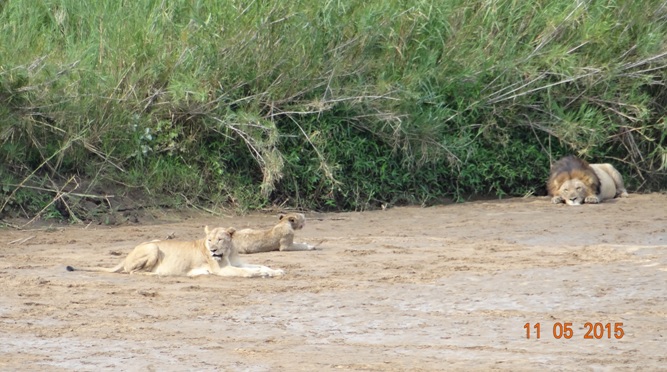 Video – Lions doing what they do best! Sleeping… on our Durban day safari tour

We decided that all we hadn’t seen was the Giraffe and it became our new mission to try and find the Giraffe. I drove all the best areas that I could with the time we had and then had to head up to the Centenary center for lunch.

Before we could get to the Centenary we stopped at a view point which you are allowed to get out of your vehicle at and it was here we saw a huge herd of Buffalo. 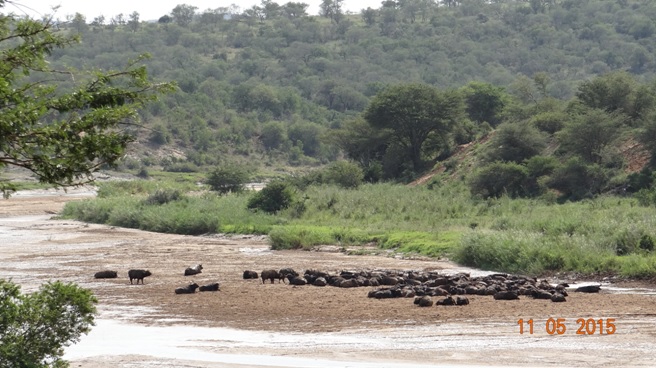 I thought this was the ideal spot to take a picture for my clients with the lovely view over the Umfolozi river with the Buffalo in the back ground. 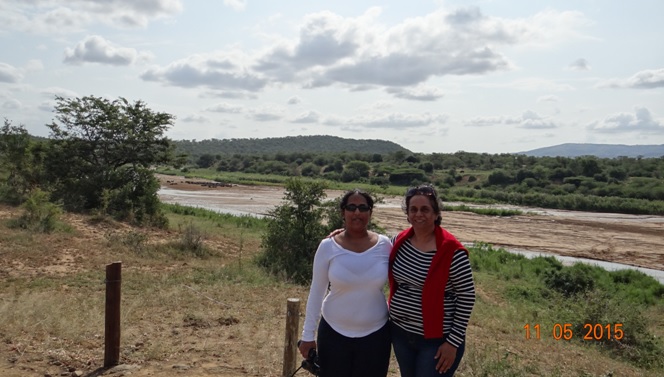 We continued on in the hope of finding some Giraffe before lunch and we returned to where the Cheetah had been. They had gone but there was some lovely Rhino in the area and they were really posing for us on our Durban day safari tour. 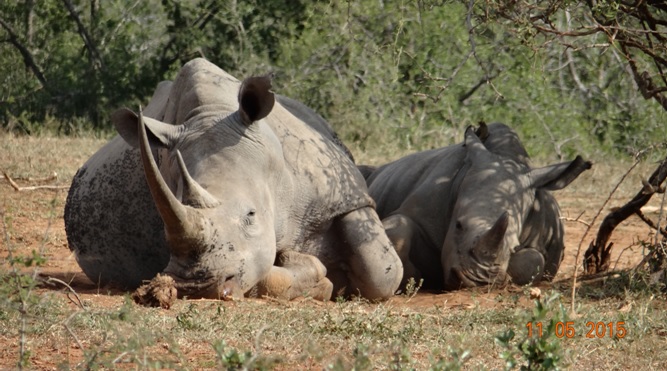 There was still one more thing would we have to photograph before we made it to the lunch stop and that was a Dazzle of Zebra and Impala on the road. Finally we arrived at Centenary center and it was here that we had a lovely lunch and a look around the world famous museum for operation Rhino. The craft market was also available and then we made our way for the final 1 and a half to find these Giraffe.

We did it! It was 20 min in after lunch and I spotted a male Giraffe in the distance so we used the binoculars to see him better and then we continued further and found more Giraffes near enough to the road.

One of these female Giraffe was either chewing a bone which they do to get calcium into their diet or she had a twig stuck in here throat. It wasn’t long and she liked her lips and continued feeding.

We had a great look at this Giraffe and then on our way back right near the gate we spotted a Big male 5 meters from the road feeding on a Buffalo thorn. It was the perfect ending to a great Durban day safari tour and we all were very happy with our sightings. 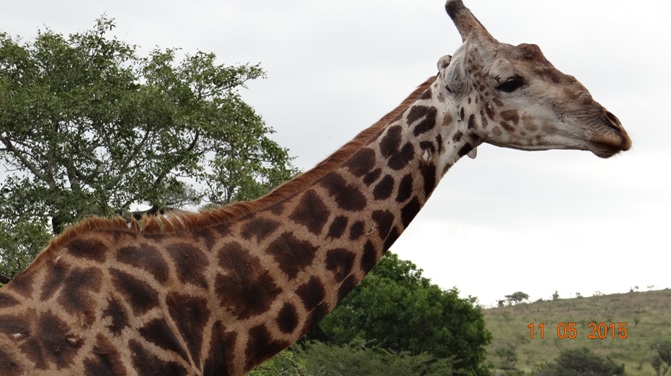