I met my clients at 4 different hotels and 4 of my 5 clients had just ran and completed the Comrades Ultra Marathon the day before. This Marathon is no ordinary feat and I was surprised to not see them crawling on the ground and only limping a little!

Our Durban day safari started great and in a few minutes we found a Leopard tortoise on the road, we made sure he got to the other side before continuing on with our safari.

It was not that many more minutes when we spotted some Baboons on the road during our safari from Durban. This really was a treat as Baboon are so similar to humans that the fascinate us a lot so it always makes for interesting viewing. 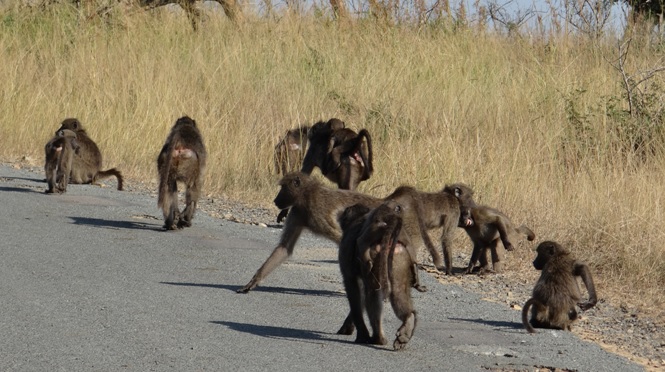 15 minutes later we spotted the most beautiful dazzle of Zebra and then got to watch two of them cross the road in front of us. We thought this was great but little did we know that just up the road was another dazzle of Zebra and some Wildebeest. On the opposite side of the road was more Zebra and some Rhino which were coming to drink water at a watering hole next to the road. Wow this was looking like being a great Durban day safari. 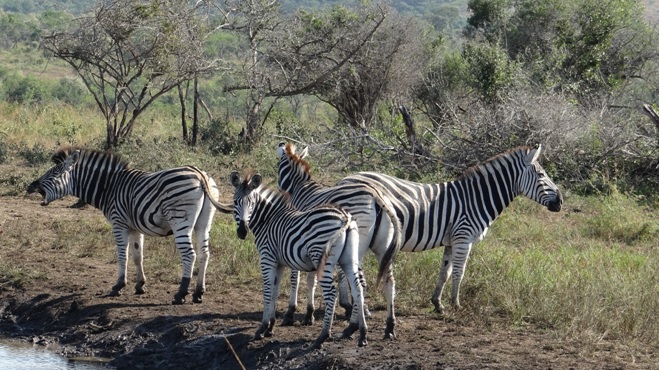 The Rhinos were amazing as they were very tentative to come and drink water and the Zebra got spooked and this made the Rhinos nervous and they ran too. A safari is a journey so we waited to see what would happen and eventually the Rhinos had a drink of water and a mere 15 meters from our vehicle. 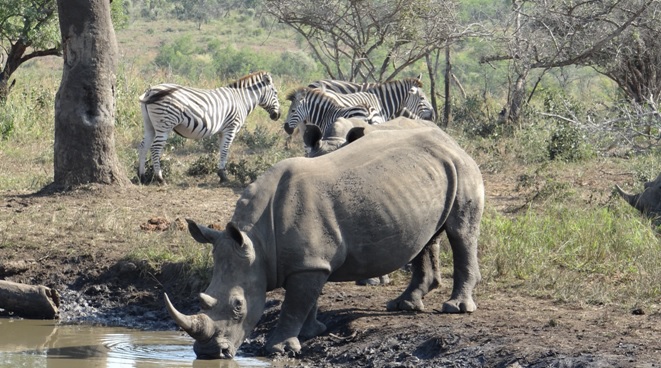 Once we let the Rhinos we continued with our day safari from Durban and got down the the Umfolozi river where we got lucky and found 2 bull Elephants feeding on the reeds. We enjoyed then for a while and at the same area on the other side of the river we spotted an old Buffalo bull resting in the water. 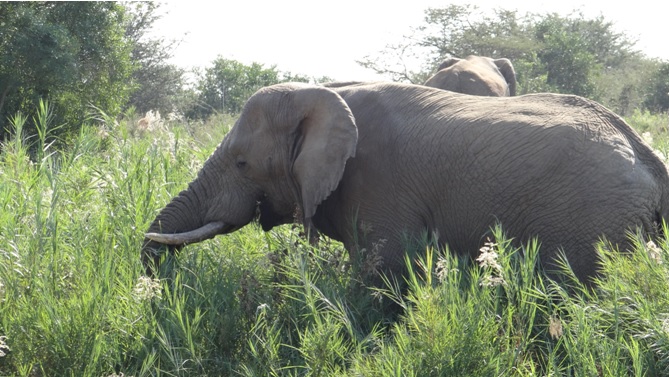 This old male Buffalo was one of the males which was no longer able to keep up with the speed that the breeding herd moves at hence he was on him own waiting to be taken by Lions. 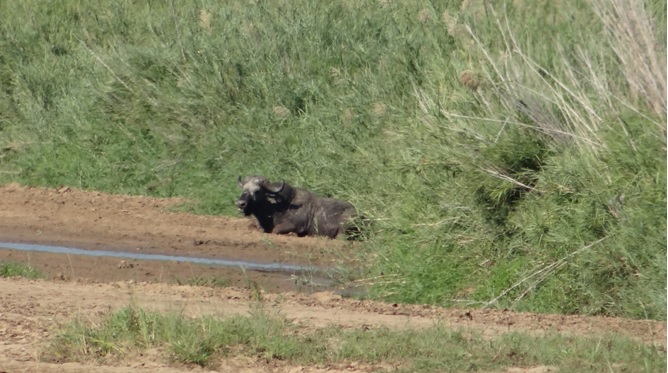 As we continued with our Durban day safari in Hluhluwe Imfolozi game reserve we took a couple of rest stops to stretch the legs. The Comrades runners were definitely feeling very stiff from the day before.

We had great luck further on when we found a crash of Rhinos in fact there was 3 crashes and they were not to far from each other. The best part was watching a mother with a new born baby. 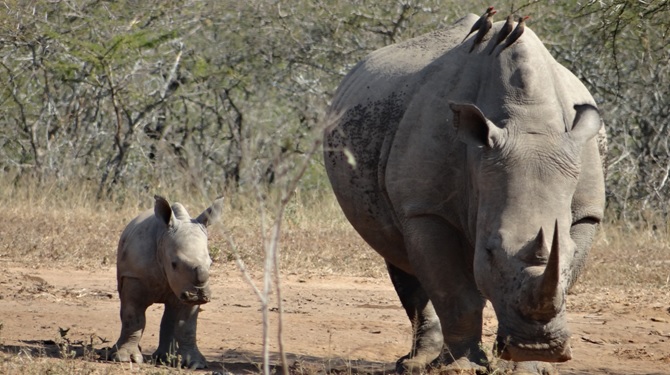 We now needed to try and find some Giraffe and it was probably getting more on my nerves than my client but I knew they wanted to see them so we just kept going trying to find them.

On route we found a lone Wildebeest male and also stopped to look over the Umfolozi river. 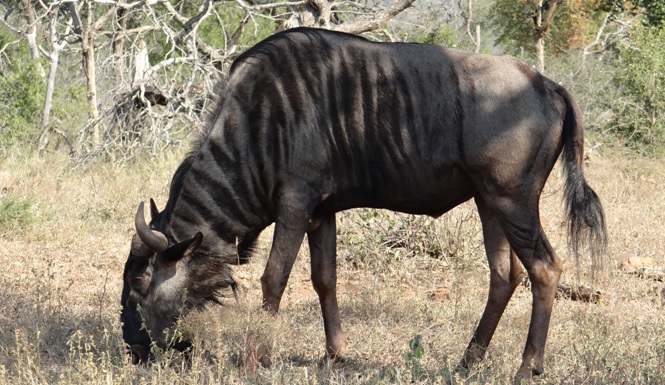 Then in the distance we saw a huge herd of Elephant down in the river drinking. We still had not found our Giraffe and I now knew we would be having a late lunch which everyone seemed happy to do.

We continued and found more Elephants and got them to cross the road in front of us before we continued with our Durban day safari. 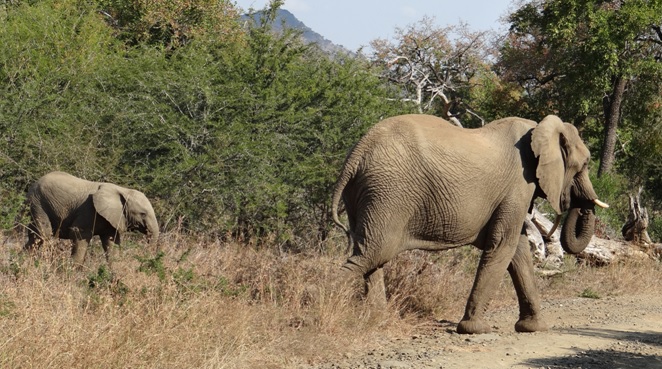 The race was now really one as I knew my client would be hungry after such a big run the day before. Luckily I finally spotted some Giraffe near enough to the road and we could relax and enjoy them before making our way back for lunch. 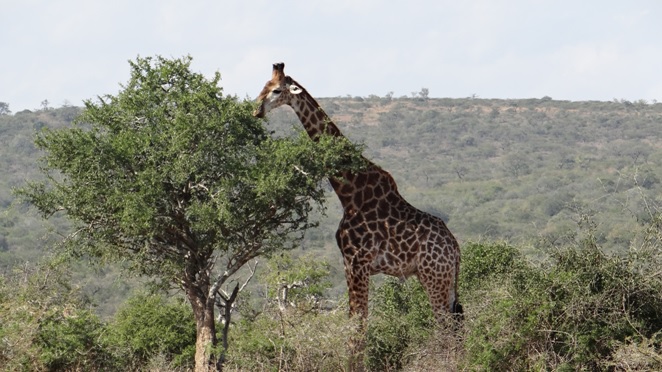 I decided to check on our way back one of the picnic sites which overlooks the river for Lions which were seen there the day before. We were in luck and with a bit of guidance we all were able to see these amazing animals with there cubs laying down by the waters edge. Wow, what a cherry on the top for our day safari from Durban!

Durban day safari; Pride of Lions resting in the river

Durban day safari; Pride of Lions resting in the river

We were no so happy and could no believe our luck that we drove past Rhinos, Zebras and even Giraffe near the luncheon stop in order to get some well deserved food.

Lunch was amazing and we all tucked in to what we ordered before a quick look around the curio shop. It was already 3pm and we had 4 drop offs to do so we began to make our way to the gate very satisfied with our day. After exiting we still had one more sighting and that was of a Bull Elephant on one side of the road and a herd of Elephant on the other side. It was special and we departed for Umhlanga and Durban.

It had been a great Durban day safari!