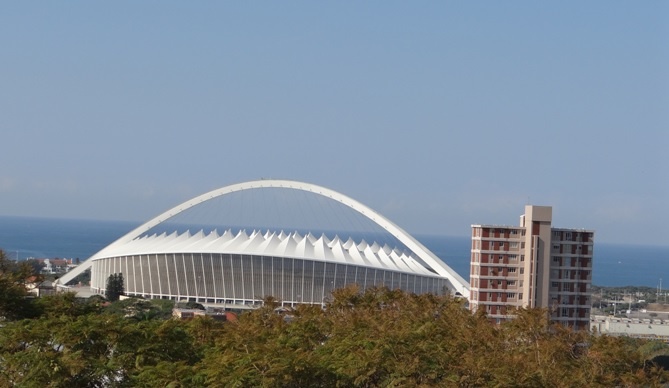 We began our Durban city tour north of Durban in an area which used to be covered with reeds, Umhlanga!(Zulu for reeds).

We took the old road into Durban the M4 and crossed over the Umgeni river where the Blue Lagoon is now and made our way towards the NMR(Natal mounted rifles) passing the Suncoast casino and visiting the Moses Mabida stadium. This stadium was built for the 2010 soccer world cup that South Africa hosted and was named after one of the many freedom fighters, fighting against the apartheid government for the liberation of all. We sadly could not do up the stadium as they were doing maintenance to the sky car but we made another plan and visited the Globe in Morningside which also has a great view of the city. Ironically the Globe covers the pumps as that area of land is a reservoir.

Our Durban city tour then took shape and we headed down the Golden mile and area which has been revamped in recent years and is looking amazing and is very safe for people to walk, run, bicycle and even take the dog for a stroll!

By the time we completed the golden mile we made our way past Ushaka marine world an amazing aquarium and visited the Vasco da Gama clock which is remembrance of his discovery of Durban or as it was known the “Rio de Natal” The Christmas river. The clock itself was revamped as well but still looks like it needs a bit more work. Moving our Durban city tour just a short way down the road we stopped at the Statue of Dick King the man that managed to save Durban from a Dutch invasion by alerting the garrison in Grahamstown 960 kilometers west of Durban! He made the trip on horse back and completed it in 10 days and 10 nights! We stopped at the Wilsons warf and looked at the old building of the Yacht club established in the 1850’s yes and that in not a TYPO!

Prior to that we also passed the old Vic Bar which is a bar where all the sailors would come in and have drinks.

After this we moved our Durban city tour to the center of Durban the CBD and I showed my client the wide streets which were used to turn the ox wagons in the early days of Durban as it was a trading port.

We then moved to the Berea and Morningside areas of Durban the more upmarket areas but not before passing the Warwick street markets and Victoria street market.

It was now time to visit the Botanical gardens and it was here we had a lovely walk around the gardens.

There is a lot of Exotic plants but also some indigenous ones. It is well worth a visit on a Durban city tour. The above sculpture depicts a Great White Shark feeding on a Seal and lots of Sardines, Cape Gannets and even a turtle. This is an amazing thing which takes place annually when a small stream of cold water is pushed by currents east into the Indian ocean of KwaZulu Natal and the Sardine get trapped in it. As the water warms the Sardines may beach themselves in the search for the cooler water they enjoy. This happens around end June.

As we continued our walk in the Botanical gardens on our Durban city tour we spotted a lovely philosophical sign. We then made our way onto Florida road the major party street in Durban as well as to the Globe before winding our way back to the Moses Mabida stadium and back to Umhlanga.

It had been a great Durban city tour!