The Cheetah were great fun and the one male was stalking Wildebeest up the fence line. Sadly for the Cheetah the Wildebeest was safe on the other side of the fence. 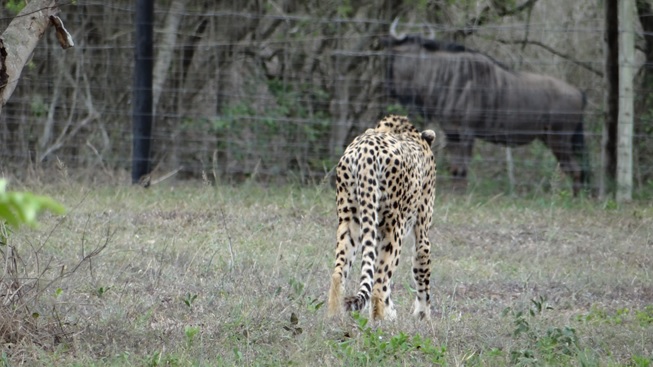 We continued into the Big 5 Hluhluwe Imfolozi game reserve.

It was an amazing start as I managed to spot a big bull Elephant in the distance on a road so we raced around to meet him head on! He was in Musth which means his sexual peak. During this time they have 6x the normal levels of testosterone! A scary problem which makes him potentially more aggressive. I therefore needed to sum up his mood quickly before getting closer. We had a blast with this Elephant! 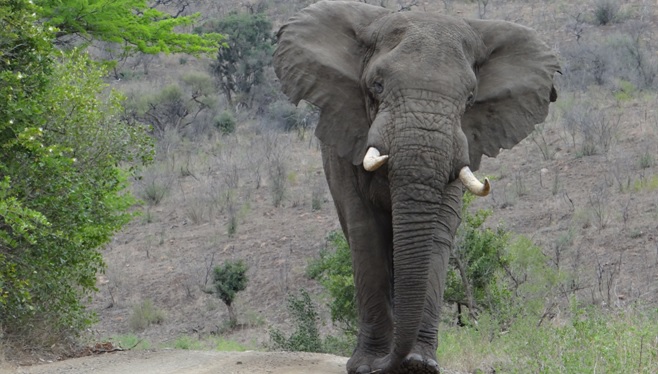 If we thought that this was all we would get from this lovely Elephant we were wrong. With the amount of space and respect we gave him we pulled off the road. And he allowed us closer so we could enjoy him feeding off a Marula tree bark. The display was one we will all never forget!

Safer with a trained Guide

Remember it is always safer and better to go with a Durban guide who is qualified in these areas. It is important to understand the animals behaviour and you need more than just a crash course in Guiding to know these things. Too many people come on their own and get lost. Or get their car shoved off the road by an Elephant! A guide will save you a lot a embarrassment and in some cases your life! Always make sure your Durban guide is experienced and qualified!

This sighting as you can see from the pictures was truly amazing. To be honest it set the tone for the rest of the 2 day Durban safari tour. We were already more relaxed and could truly enjoy our time in Hluhluwe Imfolozi big 5 game reserve.

On route to camp we spotted Zebra, Rhino and two old Buffalo bulls in the distance. As we neared the camp we spotted some Samango monkeys and two Purple crested Turacos. 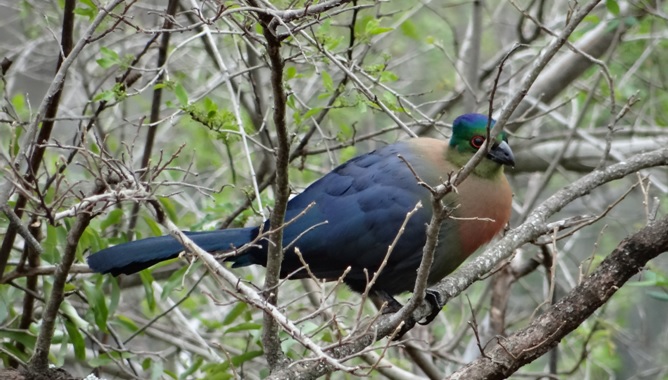 We arrived at Hilltop camp and I bumped into some friends and so did my clients. As there was a big conference in Durban which clearly meant that some people had come out a day or two earlier to indulge in a safari experience!

I got word of Lions and told my clients we need to have lunch and we can go to the rooms later. They all agreed and after lunch we flew down south and were blessed with an amazing sighting of two Lions. One was feeding on a Buffalo calf they had killed and the other was laying in the open!

Lion on Safari in Durban 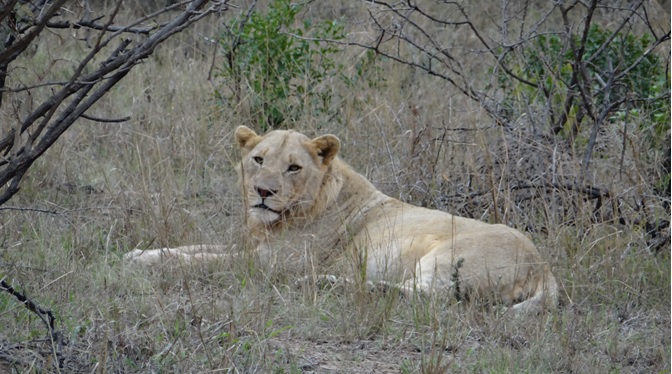 In the above picture you can clearly see it is a Buffalo calf. And you can see the claw gripping into the animal so that the Lion can feed more easily. Wow, what a great Durban safari tour!

We had to go after enjoying half an hour with these amazing creatures.

No sooner had we left I said to my clients “We haven’t yet seen Rhinos close” and a Rhino mother and calf appeared on the road, stayed for 2 minutes and then ran off into the bush! At this point I was actually feeling high, like “your wish is my command…” it was so funny! 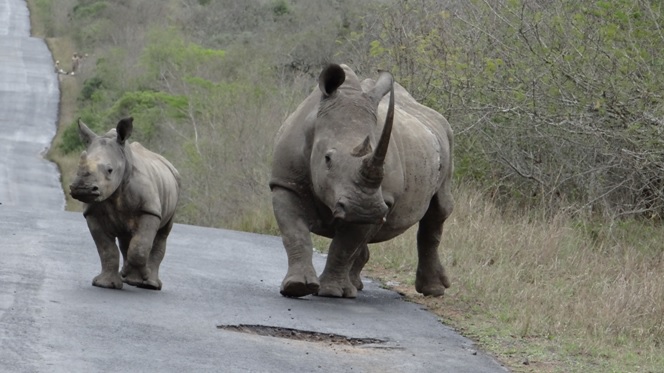 We arrived back at camp and got settled before meeting at 16:45 for the 17:00 open vehicle game drive. The excitement would not give in and there was an Elephant in front of the lodge so we all went out to look at him for 5 minutes.

Later my clients returned from game drive cold and looking forward to the dinner.

After dinner it was time for bed and we would meet for 7am the following day for breakfast before going in search of the Giraffe we hadn’t yet seen.

After collecting luggage we enjoyed the lovely view from Hilltop camp and some great breakfast.

We then checked out and went in search of the Giraffe.

It wasn’t 15 minutes and we had found a journey of 6 Giraffe near the road. We spent almost 45 minutes with them as they fed and go closer to the road and eventually crossed in front of us. Nothing like patience. 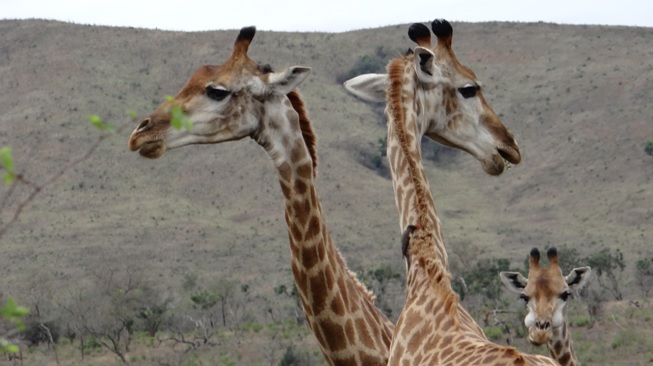 We were now satisfied and took it easy. Stopping along the way to look at view point over the river I murmured “we haven’t seen Buffalo yet” After a short while it came to be. We found a large herd of Buffalo right next to the road! This was an unbelievable mini safari from Durban! 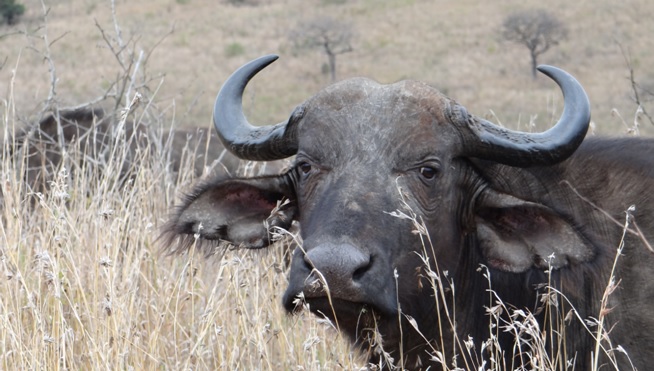 We stopped again at another view sight. It seemed as if we were being followed by other vehicles so we didn’t stay long. We headed off and had a great sighting mostly to our selves of a Rhino bull. This began in the distance and by waiting for him he crossed the road in front of us and scent marked. Wow what a great sighting we had of another of the big 5. We seem already 4 of the Big 5 in just two days. 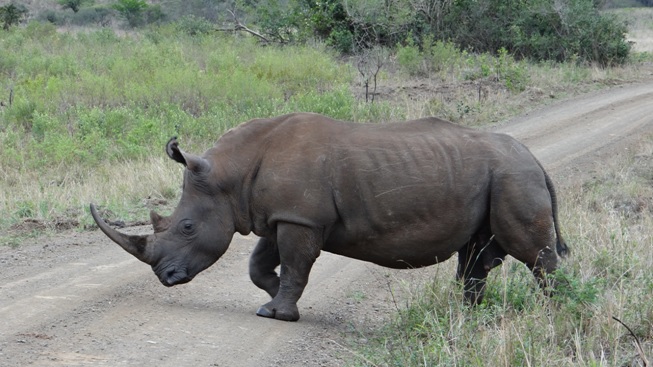 We realized what an amazing mini safari from Durban we had just experienced! It was unbelievable and we still had to go to Isimangaliso wetland park for the St Lucia boat cruise to view Hippos and crocodiles which would be amazing as well.

It was an hours drive to St Lucia. We got ourselves down to the jetty. I still have no idea how the rain held off – but it did and we had an amazing time with some of the best photos of Hippos I have ever taken. 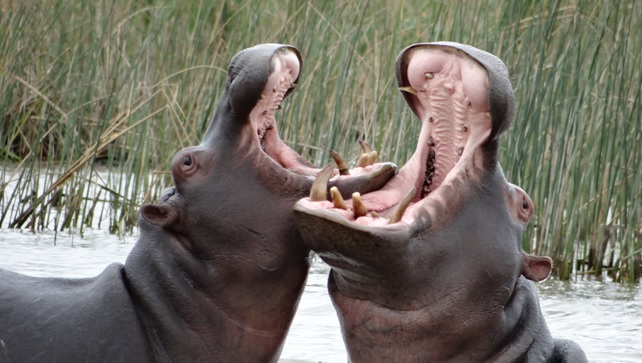 The dull light and cooler weather seemed to work in our favour. Some how we managed to spot Crocodile who usually dislike this weather. We had a number of Herons and King Fishers as well. 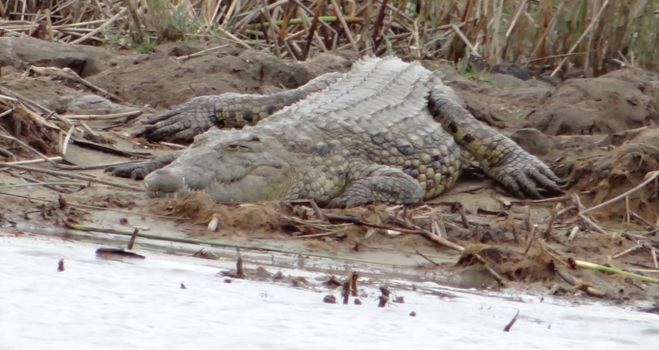 To try and sum up this two day Durban safari is very difficult as words are not enough. So I am glad I got some pictures to share with you all. It was amazing in every aspect and a true reflection as to what we have in the amazing country of ours. I know my clients will never forget it and I am sure they will be back for more of the same in the future.