Last week I was fortunate enough to take a group of guests off the Cruise Ship; Crystal Serenity, for a jam packed 2-day Safari. This was a customised tour where we arranged a new type of experience and crammed it into just 2 days.

We began in Richards Bay, where I met my guests off the cruise ship; Crystal Serenity.

Starting with a short 1 -1.5 hour drive to the world proclaimed protected area called: Hluhluwe Imfolozi game reserve. This reserve or preserve has been protected for conservation and ecotourism since 1895. This makes it the oldest protected area in all of Africa!

On route I chatted to my guests about our 2 days and what to expect as well as other important information about the area we were driving through and visiting.

As I got chatting about the young men on the side of the national highway that were selling fresh Honey and honeycomb. I explained they harvest it from the Eucalypti’s plantations and sell it to try and make some money to make ends meet.

After this exciting stop we continued to Hluhluwe Imfolozi game reserve and soon arrived to begin our Safari.

Just in case our readers and potential guests are not aware, the meaning of a “Safari” is a “Journey”. It comes from the Swahili language spoken in East Africa. It was made a common term when the “Lion King” moving was produced about 25 years ago.

Our first sighting in the reserve besides Warthogs was Giraffe which ties in nicely with the term “Safari”.

It was an incredible beginning to our Safari experience as we just kept spotting animals and with patience, we got to have some of them cross the road in front of us.

Video of Giraffe crossing a road

Watch a Giraffe scratching herself 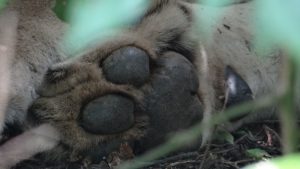 No rush for Lunch : Too much too see!

Once we looked at the time it was already after 14:00 and we still hadn’t stopped for lunch. I spoke to my guests and they agreed that there was no rush as the excitement of seeing the animals had taken any hunger away.

We then spotted an Elephant! So now in a couple of hours we had spotted three of the “Big 5”;

All that was left of the “Big 5” list was the Rhino and Leopard! I was beginning to be concerned that everyone was going to think this massive 96 000 Hectare preserve was a “Zoo”!

We arrived at our luncheon point, a lodge we usually stay at on our overnight trips and we settled in for some food before continuing with our amazing Safari experience.

Before we could get too far, we came across a Troop of Baboons on and next to the road…This really was getting ridiculous, so we just keep riding our luck!

As the afternoon progressed, we were blown away with many more sightings and it got to the point where we had to concede we would be missing our check in time. I knew security would be at the lodge when we eventually arrived, so I didn’t worry too much about it. So, we just worked on getting to the lodge before lockdown at 19:00.

We stopped at a lovely view site overlooking the Black Umfolozi river. I decided – as it was sunset  – to check the view point to make sure it was safe before allowing my guests to join me.

The sunset was amazing, and we all got some great pictures.


A Crash of Rhino

We left and continued and as we still had not seen Rhino close, I decided to venture down a dirt road which has a lovely open area and picnic site. The open areas are ideal for White Rhino as they eat grass. We were in luck and there was a “crash” of four Rhino.

Then had the most unbelievable sighting of four White Rhino! There was a Mother with a year-old calf and two sub-adults with them. To explain this sighting is near impossible so I do have some video footage but again even that does not do the experience justice.

The calf was intent on playing and got within a few meters of our vehicle at one point, he has merely playing but it gave my guest a real good fright.

The best part was we were at a picnic site on the reserve and there was a “Trash can”. The calf, a young male was playing with one of the subadults and pushed him into the “Trash can”. I mean pushed his head so that it bumped the “Trash can”. It was almost like we had the experience of having Rhino in the City…

By this point I realised it was 18:30 and I had 30 minutes to get to the lodge, so we had to leave the Rhino in the fading light.

So, we continued rather briskly and at the Black Umfolozi river crossing I saw something I have never seen there before:- two Hippopotami! Normally Hippo need water that is 1.5 meters deep but as we had had a lot of rain recently, the river was just about high enough for them!

They were meters from the bridge and clearly had not often seen vehicles as they bolted out of the water and hid themselves in the reeds. I did get a short video, but it was not very good at all.

I now had no choice but to rush to get to camp… We arrived a few minutes before “lock down” and I got on the phone to the duty manager. All was sorted within that phone call and I took my guests to their rooms.

Before we could really settle, I had to begin the Braai. (A Braai is a “Grill”, a “Barbeque”).

I got the cooler box out of the vehicle with the food I had prepared the day before which was:

Lighting at this lodge is limited. This made the experience more exciting as there are no fences  – excepting the high “Elephant” wire to try keep the big boys out.

This all means that Hyenas, Lions, Leopards or any animal can wonder into the lodge or keep an eye on you while you are having a Braai and eating dinner.

Fortunately, everyone was relaxed and enjoyed their Wine. Once I finished grilling the meat and heating the veggies we could eat.

I got out my laser pointer to do some star gazing like pointing out the Southern cross and Orion etc but sadly the battery decided to die on me after pointing out a few stars. Fortunately, the stars were bright so we could still get through the Star gazing before bed.

Over dinner we discussed the following days activities and decided we would leave the lodge at 5:30 to maximize our time we had in the day.

It was time for me to head to my room and get some rest before the early start and I excused myself while my guests enjoyed a drink and got a shower in before the power gets shut off at 22:30.

Day two began at dawn and I met my guests at their Chalet in time to watch the sunrise.

Once everyone was ready, we went out looking for some Lions. We just didn’t have enough time as true to form we saw to many other animals!

This was honestly ridiculous, and I could not explain to my guests how lucky we had been.

Elephant and Rhino together

We had decided to go up to the catered lodge “Hilltop camp” for breakfast. So we turned back and bypassed “Mpila camp” where we had spent the night.

On route again we saw so many amazing animals, but I knew everybody’s mind was on Coffee and breakfast. Once we arrived at Hilltop camp we settled in for some breakfast.

Shortly after breakfast we made our way to the gate to begin a new experience which would be with Orphaned Elephants from “Kruger national park”. These animals were part of past culling programs to reduce Elephant populations as they can be very destructive. An Elephant can eat up to 350 Kilograms of plant material daily.

The Elephant interaction began at 11am and we were introduced to three Orphaned Elephants which with their caregivers have now become ambassadors for their species. (Please note there is “NO” Elephant back riding it is purely educational and interactional). 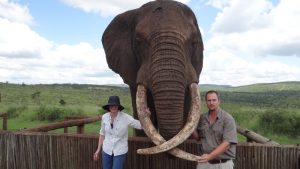 We all enjoyed the experience. Once it was all over, we decided to adjust the itinerary slightly and get some nature walking in. After sitting in a vehicle for so long it is always nice to get on your feet and walk in the African bush.

After a couple phone calls and a quick stop to grab something for the road, we arrived at our destination. Here we would begin a guided 2-hour bush walk.

Everyone enjoyed it and the experience had now gone full circle! We had experienced the Safari from the Vehicle, on foot and interacted with the worlds largest land mammal, Elephant.

It was now time to begin the 3 hour drive back to Durban where we would meet up with the Crystal Serenity cruise ship and say our farewells.

Arriving back, I think everyone felt a bit deflated that the whole experience had come to an end. But there was also the excitement of watching the amaing footage everyone had captured over the past two days.