It Frustrates me when people make statements like this and you battle to find out why it is been said to be true.

Ive tried my best here to answer this question/statement with information I found.

Oaks tend to grow taller than most other trees and have a long life span of about 300 to 600 years.

They also have a deep central root as well as hollow water-filled cells that run up and down the wood( Cambium – Inner bark) of the oak’s trunk.

Trees are frequent conductors of lightning to the ground. Since sap is a poor conductor, its electrical resistance causes it to be heated explosively into steam, which blows off the bark outside the lightning’s path. In following seasons trees overgrow the damaged area and may cover it completely, leaving only a vertical scar. If the damage is severe, the tree may not be able to recover, and decay sets in, eventually killing the tree. In sparsely populated areas such as the Far East and Siberia, lightning strikes are one of the major causes of forest fires. The smoke and mist expelled by a forest fire can cause electric charges, multiplying the intensity of a forest fire. It is commonly thought that a tree standing alone is more frequently struck, though in some forested areas, lightning scars can be seen on almost every tree.

The two most frequently struck tree types are the oak and the elm. 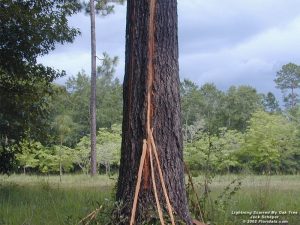