Experience our adrenaline-gushing wildlife safaris to Hluhluwe Imfolozi ‘Big 5’ Game Reserve organized by Tim Brown Tours. A Hluhluwe Safari is your best chance of seeing some of the ‘Big 5’ near a big City like Durban.

The region of Durban, KwaZulu-Natal boasts some splendid Safari game reserves and big 5 safari national parks. Located at a distance of merely 2.5 hours drive from Durban, the Hluhluwe Imfolozi game reserve offers a world of wilderness where an enriched variety of fauna lives together in harmony with nature.

Imagine witnessing the King of the Jungle the Lion basking in sunlight, a herd of grand “Tuskers” passing you with a royal indifference or a leopard hunting its prey- these are some mind-numbing sights offered by any African Safari.

Be a part of this by signing up for our customizable Durban Day Safaris from Tim Brown Tours.

The Hluhluwe Imfolozi game reserve is malaria -free zone and is very popular among a lot of tourists.

Book our Safari Tour now and get ready for a fantastic adventure!

✓   Having the possibility of seeing the Big 5.

✓   Being in nature where seeing anything is possible while in the capable and safe hands of your qualified and experienced guide.

It’s an early start! You will be collected from your accommodation venue. This only applies to pick-up’s and drop-off’s in Durban City, feel free to contact us if you are unsure as to whether your pick-up location is covered. Should your pick-up location not be covered, we will still collect you, however, there may be an additional charge dependent on where you are based.

From time of pick-up, it is approximately a 2.5-hour drive to Hluhluwe Imfolozi Game Reserve. During transit, your guide will share a bit of history with you and you are encouraged to ask questions to reap the full benefit of the safari. Rest assured that you will travel in absolute comfort as Tim Brown Tours use a Ford Tourneo or a Ford Everest to conduct all tours. This is subject to availability and Tim Brown Tours reserves the right to make alternative vehicle arrangements

Once you have reached your destination, Hluhluwe Imfolozi, your guide will attend to the necessary entry requirements into the park after which you will take a slow Game drive towards Hilltop Camp. Your guide will educate you on the history of the area as well as conduct a 4-hour game drive in a closed air-conditioned vehicle so you can experience the amazing wildlife that Hluhluwe Imfolozi Game Reserve has to offer in comfort. Have your cameras ready! Dependent on time, we shall stop Hilltop Camp where you will have the opportunity to stretch your legs. The views from the terrace will leave no doubt in your mind that the name “Hilltop” has been aptly chosen. Here you will also have the chance to view the sightings board which will give you an idea of animals spotted on the day as well as have the opportunity to add your own sightings. Should time allow, we may rest for lunch (This is at the discretion of your guide and not included in the tour. All meals are for your own account).

Once again, you will be given the chance to spot some game when you depart the Hilltop Camp and make your way for the exit gate. After the game drive,sadly, its back to Durban.

Approximate time of arrival in Durban

The elephant – gentle, wise and with the ability to walk with such grace considering its size has always fascinated those visiting the park. The males are identifiable by their rounded head, thicker and larger tusks and larger body size. The females have a flat top head which comes down at angle to the trunk. The Big 5 – Lion, Leopard, Rhino, Elephant and Buffalo were classified as such as they were and are the most dangerous animals to hunt on foot, the Buffalo being the most dangerous.

Besides the Big 5, and the various other large species of mammal found in the park, the park is home to over some 1200 species of plant, it is abundant in birdlife, reptiles as well as little guys – don’t overlook the little guys. Remember, that here the dung beetle gets right of way. 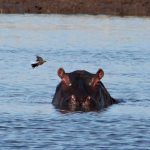 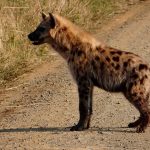 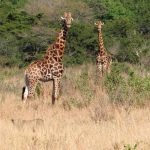 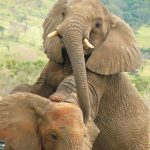 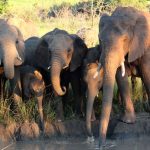 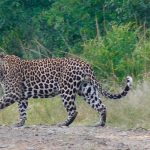 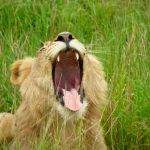 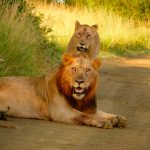 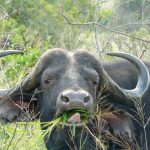 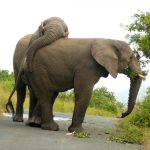 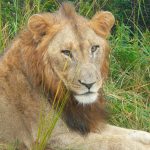