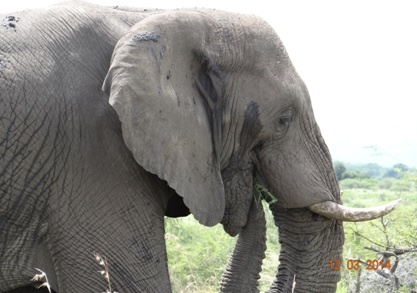 I collected my clients from Umhlanga just outside Durban for there 2 day Safari Tour to Hluhluwe umoflozi game reserve and Isimangeliso wetland park(St Lucia).

This overnight Safari Tour from Durban had a quick start even with the weather being a little cloudy at times. We entered into the umfolozi section of Hluhluwe umfolozi game reserve through the Nyalazi gate and headed down south to try get lucky with finding the Cats. This was not to be, however we did find White Rhino, Buffalo, Elephant, Kudu, Warthog, Impala, Zebra, Wildebeest and Giraffe before the day of Touring as done.

Actually the number of animals we saw was amazing for the weather and time of day on the Durban Safari Tour in KwaZulu-Natal. 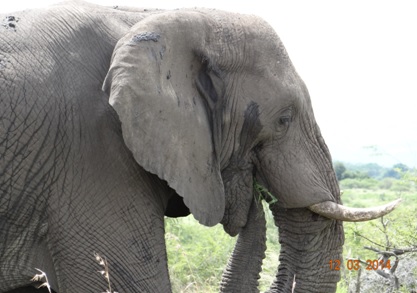 We found this Bull Elephant actually there was a small breeding herd and about 4 Bull Elephants which were grazing away enjoying the grass after the big rains we have been experiencing. The rain can be both a blessing and a hindrance in Hluhluwe Umfolozi game reserve when we Tour there. Basically the animals do not need to stay close to the permanent water sources if there is a lot of water around which means they could move far and wide in a 960 square Kilometer reserve.

Later on our Safari Tour from Durban we came across some Giraffe feeding on the Acacia trees. 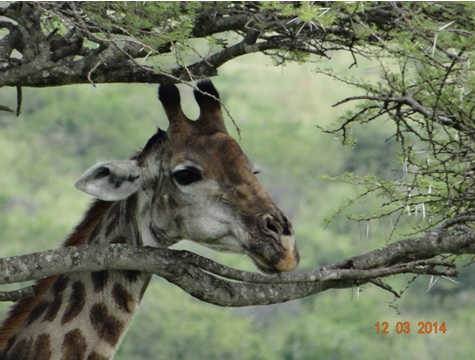 We continued on further on our Durban Safari Tour in the Bush and found more animals.

This was a beautiful image of a Dazzle of Zebra resting there heads on each others backs which also means the tail of the other keeps the fly’s off the others  nose. 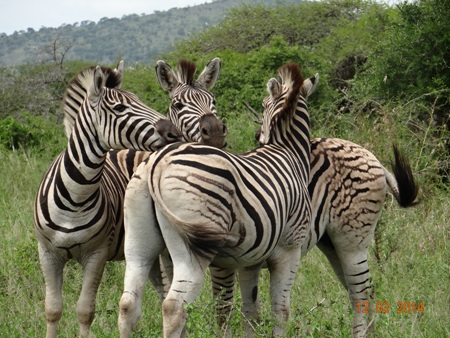 We eventually stopped for lunch at the centenary center home to operation Rhino in the 1960’s. The food was great for a place in the middle of the bush. We continues our safari tour shortly after and moved into the Hluhluwe Section of the Hluhluwe Umfolozi game reserve.

It was a little quiet and we needed to check in so we stopped at Hilltop camp before heading back out into the bush to Tour the northern Section.

We we lucky as the grass was at eye level to find this young male White Rhino on the road. 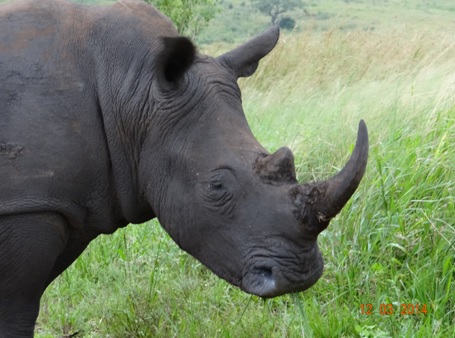 By this point in time I was feeling pretty tired with all the driving and concentrating mostly because the sightings became harder to come across with the long grass in Hluhluwe Umfolozi game reserve.

We found a troop of baboons which were about to go and sleep in the Sycamore fig trees for the night.

This beautiful Male Baboon sat in the road for use posing before darkness fell upon our Safari Tour from Durban. 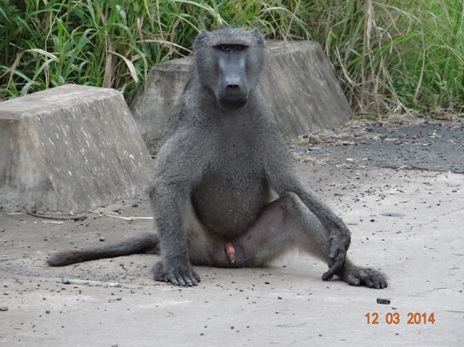 We began our Safari Drive back to Hilltop camp where we would be spending the night and in the darkness we had some excitement but not the kind you really want. A branch of a tree almost fell onto the car and as we came around another bend 2 big elephant bulls were standing in the road. What excitement.

We got up really early and were on the reserve Hluhluwe by 05:30 in the dark. It was great but sadly a little quiet on the animal front. So after 2.5 hours we returned to Hilltop camp for Breakfast and big Buffet. The coffee was most welcome.

We then did a very quick check out and began a final Safari Tour of Hluhluwe Umfolozi game reserve before heading out at Memorial gate in the North and onward to take a 2 hour boat Tour at St Lucia(Isimangeliso Wetland Park).

When we arrived and hopped on the boat at St Lucia it was a little cold but it warmed up as we saw load of Hippos and 2 big crocodiles. There were some beautiful Fish eagles and Kingfishers as well on the estuary in the mangrove swamps.

After the 2 hours it was time for lunch and then we began the 2.5 hours back to Durban after a great Durban overnight Safari Tour to Hluhluwe Umfolozi game reserve and St Lucia(Isimangeliso wetland park).

If you are interested in our Safaris and Tours from Durban see our reviews on TripAdvisor by clicking the selected text.