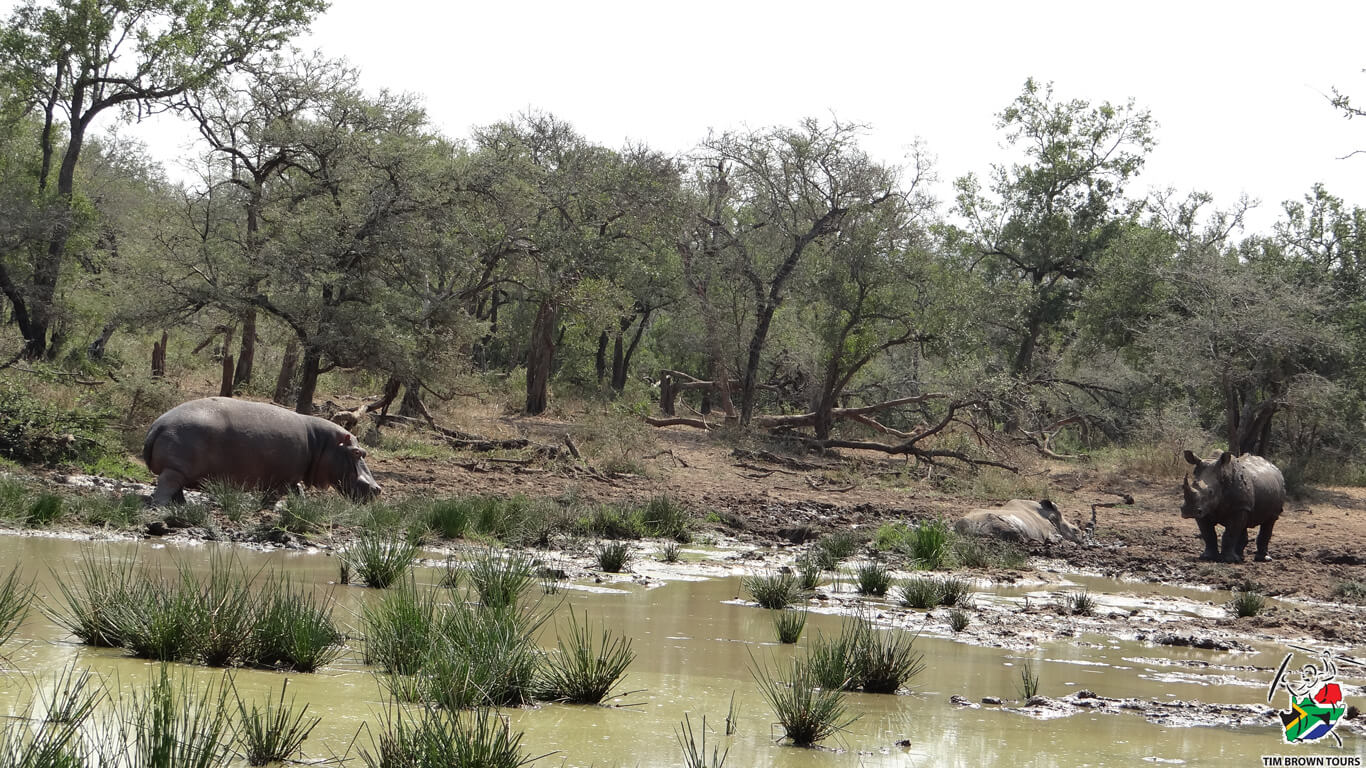 A couple days ago we shared an amazing animal sighting. I conducted a Durban Safari tour with our group of Norwegian guests who were here in Durban to compete in the Kayak world championships. This took place on the Duzi river.

It is the start of our Spring now which basically means that its Summer time and temperatures a warming up. On this particular day the Mercury rose into the mid -30’s Celsius! Air-conditioning was a huge help…

Our Safari started really well and we saw a huge variety of animals. We saw Zebra, Giraffe, Wildebeest, Elephant, Buffalo and a number of antelope species. We then got ourselves down to the “Black Umfolozi River” – The River of Fiber being the translation from Zulu into English.

It was here that we detoured off to a mud wallow. We were excited to see a Hippo in the Pond section of the Wallow and White Rhino in the other! We watched intensely as I went over some interesting information and shared the rarity of even finding a Hippo in this small pond.

Excited, a Woolly necked Stork flew in and gave the Hippo a huge fright. He then raised himself out of the algae covered water and began to mark his territory. A male Hippo will do this by defecating in and around his territory, swishing his tail spreading the scent. So his dung end up going all over the place.

The Hippo then got up and slowly made his way over to the Rhino(two young males) and this is where things go really exciting!

We would not normally see such a scene but there are always factors which can cause behavior which is not by the book so to speak! One of the Rhino’s go a fright and turned to run away while the other was a bit more relaxed and got up momentarily before laying back down in the mud. If you are not sure why the great beasts mud wallow it is for a number of reasons; one would be to cool down the body temperature, two would be to aid in the removal of external parasites and thirdly would be to protect them from sun burn.

The next thing we knew the Hippo lay down in the mud after a small dominance display by nodding his head at the Rhino. Then both Rhino and Hippo shared the mud a mere couple of meters away from one another!

This may all sound normal but it is not. Usually Hippo for a start would be in larger bodies of water. Rhino would be totally freaked out if while mud wallowing a large Hippo wanted to join them!

Reasons for the Hippo being there are quite straight forward. As the reserve is lacking water Hippos will have to make do with smaller bodies of water. This Hippo being a male and on his own, would more than likely be a sub-adult who was kicked out of his Pod of Hippo. This would be done by his dominant father.

The reason for him moving over to the Rhino again are fairly straight forward. The Hippo is already out of his comfort zone being away from the security of the Pod of Hippo. This means that having a couple vehicles watching him and a bird giving him a fright, he would want to display to all that he is big and it is his territory.This he did…

Then he attempted to scare away the Rhino away from his territory. Being only himself and the Rhinos being two rather than just one, the Hippos display didn’t work. He continued to approach in the hope that the Rhino would move off. The Rhino did not move so the Hippo just decided it was easier to lay down in the Mud near the Rhino. This was due to the Rhino not threatening him therefore they could all just relax and share the wallow. This is exactly what happened!

This was truly an amazing animal sighting!

You can watch the video right here:

If you wish to watch more interesting videos you can click the link below to our YouTube page: