After having a few days off from being on the road I began another Hluhluwe game reserve safari. This time for a couple from America who were out in South Africa for a holiday.

An African safari is always the best way to see the best that Africa has to offer. And Hluhluwe game reserve – which is a Big 5 reserve –  is the best place to visit if you are in the Durban, KwaZulu Natal area.

Hluhluwe game reserve is a mere 2.5 hours away from Durban city. And one of the best choices for a one day safari.

We arrived earlier than I expected. And I had an idea where Lions could be from discussions with some guides the day before. We went straight there but the Lions were no where near where I had been told. I figured I would try another 5 km up the road just to be sure. And just as I was about to turn back we spotted them feeding on a Buffalo about 100 meter off the main highway. This road cuts through the middle of the Hluhluwe game reserve in the North and the Umfolozi game reserve in the South.

Hluhluwe Lions on a kill 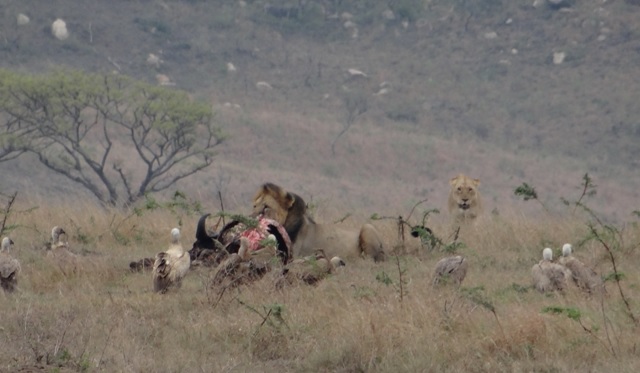 It is a bit of a misconception that Vultures always circle when there is a kill. They circle and drop down waiting in the near by trees and on the group for the predators to finish. A lot of the time you can see vultures circling and you assume they have found a carcass. Most of the time it is just them catching the thermals. After leaving their roosting spot they use the thermals to conserve energy circling upwards before heading off to find a carcass.

These Lions had killed this Buffalo a couple days before and we got to see 5 Lions in total. There were two big males and 3 Lioness.

We spent approximately 45 minutes with these Lions, watching them feed and move around. We then decided we better head into the gate of the Hluhluwe game reserve and investigate roads that we can only use by paying the entrance.

What was so funny was that on this one stretch of road we had seen 3 of the Big 5, Buffalo, Lions and Elephant.

We entered the Hluhluwe game reserve and had some luck. We spotted a dazzle of Zebra walking down the road towards us. 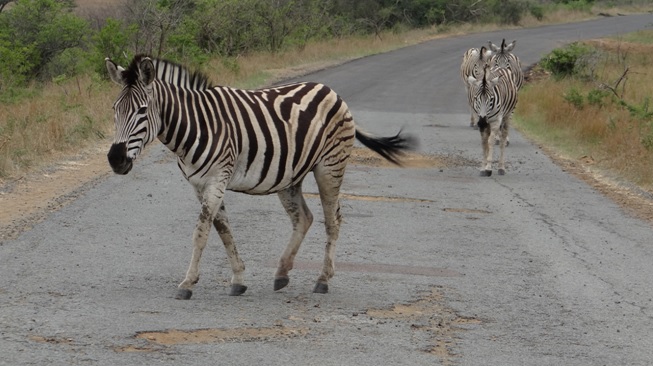 We had a great sighting of these Zebra and we made our way further north in Hluhluwe game reserve to and area where Lions had been seen. Sadly for us we were 10 minutes too late. And the Lions had moved away with all the vehicle pressure so we only saw them far off. All was not lost as I spotted some Giraffe and Rhino followed by Elephant. It really was turning out to be a great safari in Hluhluwe game reserve.

We headed back south out of the Hluhluwe game reserve in the Umfolozi game reserve. It was here we spotted Rhino and one was marking his territory.

Rhino marks his territory in the Hluhluwe game reserve 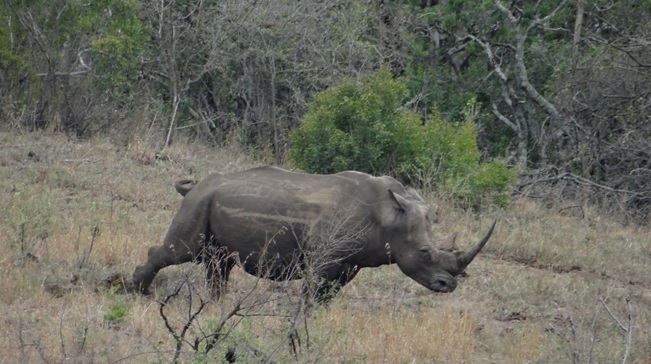 What is a Midden?

The male Rhinos kick their dung and scatter it out in what we call a midden. This is a regular spot within their territory that they use to mark out their boundaries. The scattering gets their scent into their feet as well and they can then walk putting more scent down as they go.

We were trying to get ourselves down to the Umfolozi river but kept seeing things like Giraffe and Impala so it took longer than we expected.

At one of the view points over the Umfolozi river we spotted Lions far down stream. As well as Buffalo and Rhino together laying in a small patch of water on the sand.

Hluhluwe game reserve; Buffalo and Rhino in the riverbed 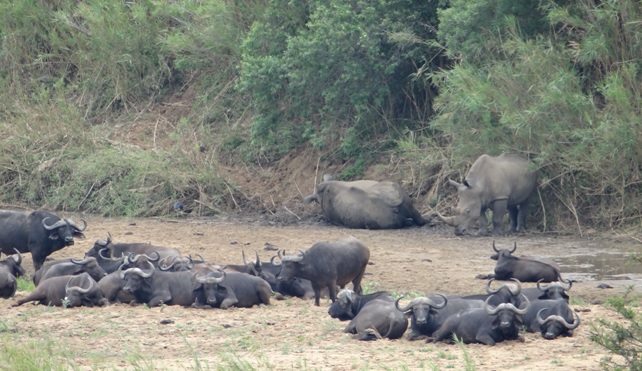 We enjoyed the fresh air and stretching of our legs before continuing on to the actual river crossing. As we began we all gasped as literally 15 meters from the bridge was two big bull Elephants. They had dug a hole in the sand and were drinking the fresher water below.

It was a great sighting as there was about 6 more Elephants further down stream as well. We mostly enjoyed the two nearest to us and spent a lot of time with them.

Elephant in the riverbed 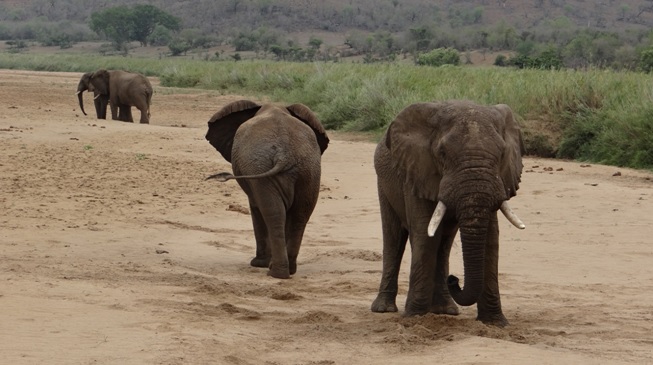 It was now already 13:30 and we still had to get back to the luncheon stop but none of us were complaining. There had been so many amazing animals in Hluhluwe game reserve on our African safari.

Leaving the Elephants we continued our African Safari and with another stoke of good fortune spotted a male Giraffe near the road. We waited as I felt he would cross in front of us and we were lucky as he did! 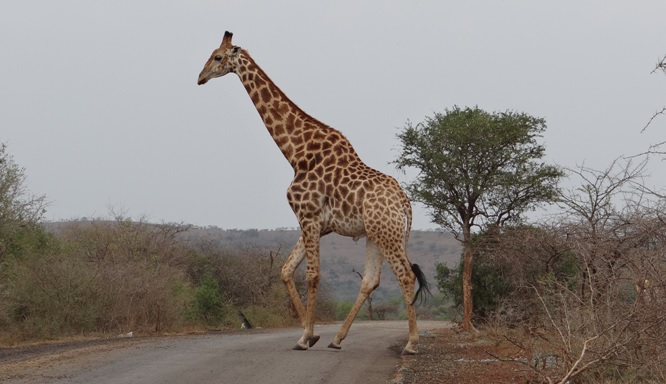 This was now the Cherry on the top on our day. Time to get some lunch, look at the craft market and make our way back to the Lions we had originally seen. … To see what was happening.

We had a great lunch and then re-visited the Lions. They had left the carcass to the Vultures and between the three of us we managed to eventually spot where they were resting under a tree very far away.

I was lucky to have some great eyes in the car. The things I missed my clients spotted which was great and made the day that much more fun and exciting.

We departed for Durban and chatted about the amazing day and any other questions that my clients wished to ask.

Thank you to my clients for joining me on this African safari to Hluhluwe game reserve I hope you enjoyed the blog post just as much a I enjoyed seeing all those amazing animals with you.

Interested in Nature and Travel in South Africa? Then head on over to our Tours and book your very own Safari today – You know you want to![vc_row 0=””][vc_column width=”1/3″][vc_toggle title=”One Day Tours and Safaris”]Battlefields of Kwa-Zulu Natal