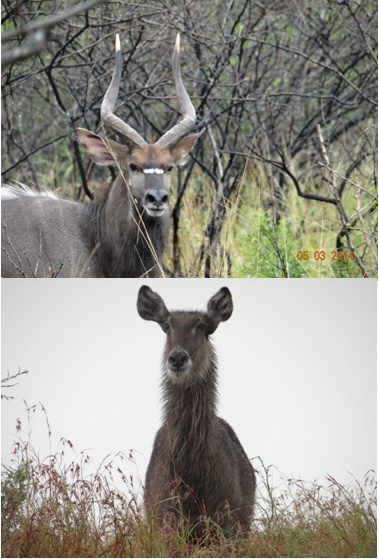 After collecting my clients from the Royal hotel in Durban we began our Durban Day Big 5 Safari Tour to Hluhluwe Umfolozi game reserve Africa’s Oldest!

Taking a Big 5 Safari Tour should never be a excuse to assume that you will see everything you wish to see and today really proved that. After expecting the rain to stop so that we could have a chance at seeing animals come out to remark there territory, it just kept raining. So our sighting we very hard to come about and not the clearest.

Having said the above we did see 2 Of the Big 5 and other animals : Rhino, Buffalo, Giraffe, Impala, Nyala, Warthog, a Giant legless skink, Wildebeest, Waterbuck and lots of Elephant dung but no Elephant… We even got tracks of Hyena and Wild dogs but we were to late. They say life is all about timing and I agree…

A Safari Tour from Durban in the Rain at Hluhluwe Umfolozi: 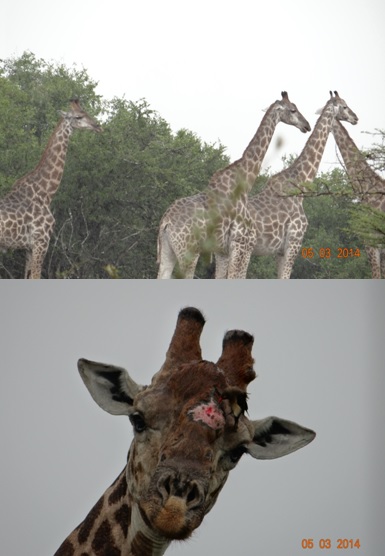 The pictures above show some of the Giraffe we managed to find on the Safari Tour from Durban. The Bottom image of a male Giraffe shows a wound on his head and the red billed oxpecker cleaning it up. Very often they do more damage by opening the wound and preventing it from healing but this chap didn’t mind at all. Just one of the little surprises Hluhluwe Umfolozi game reserve spits out at you every so often. 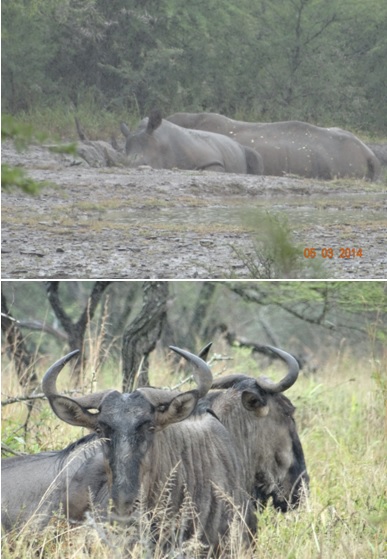 These Rhinos on of the Big 5 were seen laying in the mud about 60 meters from the road and the Wildebeest 5 meters from the road with some vervet monkeys. Sadly we didn’t get a closer sighting of the Rhinos than this but that is nature for you, you are never guaranteed anything. Considering it was raining I think we did alright on the Safari Tour from Durban city. 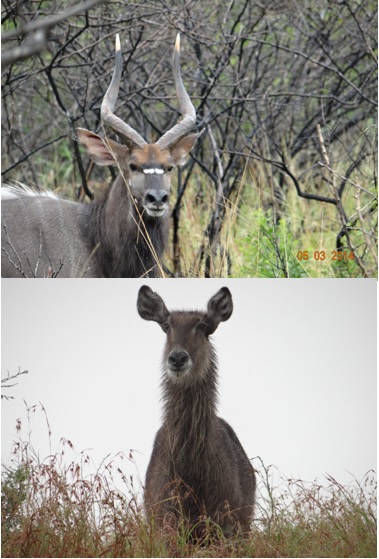 Hluhluwe Umfolozi game reserve Safari Tours always show interesting things. This Day Safari Tour we got to see this male Nyala clash horns with another male over the right to mate with females. It was very exciting as it was 15 meters off the road an the clash of horns could be heard almost like gun shots. They continued to wonder around each other with hair stood up on neck and back (philo-erection) as its known. Very cool sighting in the rain at Hluhluwe Umfolozi.

Oh the wonders of the African Bush (Tours) never a dull moment even when its raining.

So after departing from Hluhluwe Umfolozi game reserve we headed back to Durban City in the comfort of the vehicle after an interesting but wet Durban Day Safari Tour.

Maybe you should join Tim Brown Tours on a Durban Day or overnight Safari Tour to Hluhluwe Umfolozi game reserve.