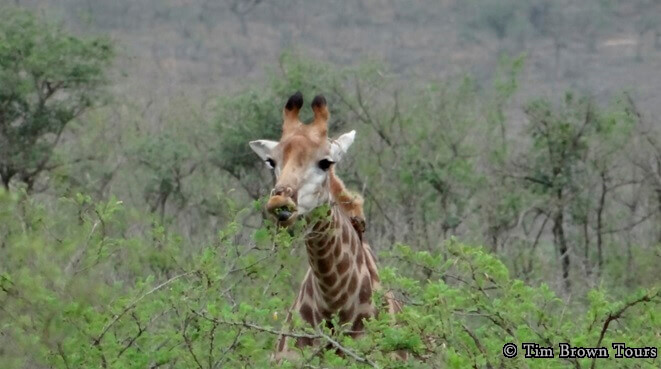 As we continued our Durban safari tour we came across some Wildebeest as well and one mother has a new born with here which still had some of the umbilical cord attached. At the same point there was some Zebra which were a little skittish and after a while we got them crossing the road in front of us like a real Zebra crossing! Our Durban safari tour was beginning to hot up! We then headed down to the Umfolozi river but before we got there we spotted a Elephant bull which had just finished a mud bath and then began to rub up against a tree. Within 10 minutes a Giraffe walked around the back of him and another bull Elephant came for a mud wallow.

It was a great sighting for the first day of our Durban safari tour. We went down to the Umfolozi river and found only a couple old Buffalo bulls so we headed back to Hilltop camp for some lunch.

On route to Hilltop camp we spotted some Nyala and the male was testing the female to see if she was ready to be mated! She was not… We arrived at Hilltop camp and as it was Sunday buffet and fully booked we had to wait for our lunch but it was fine as we had some Buffalo outside the dining room.

We checked in and had a short rest before heading back out!

Only two of my five clients came out on the afternoon game drive with me which usually means we end up seeing something amazing and the other miss out…and we did!

We began with a great sighting of a Rhino crossing the road in front of us. As our Durban safari tour continued we spotted another Elephant and this bull was making his way to the road as well so we let him cross in front of us and got a great shot with lovely lighting. We continued and as the sun began to go down on what had been a great Durban safari already we spotted some Lions stalking a Giraffe in the river bed. It was a great sighting a little hard to see but it was still great. We managed to see another male Lion just resting and watching the Giraffe from another angle. While we were engrossed in the Lions we noticed a Rhino mother with a young calf also come down to drink, it was a lovely ending to what had been a great Durban day safari tour. Our Durban safari tour had started so well and after arriving back at Hilltop camp we went through for some dinner to tell our stories from the day. We also got to watch some Zulu dancing from the staff before we retired to bed.

I met my clients just before 5am and we headed out to check on the area where the Lions had been stalking the Giraffe the evening before.

As per usual when you are trying to get somewhere you always on these Durban safari tours find lots of animals so on route we spotted some Rhinos resting at a view site! As we continued we thought we would be able to get to the area quickly but then we had Elephants on the road and they climbed up a bank. It was a great sighting as the one Elephant slipped on the bank and let out a great big trumpet with embarrassment. We left our Elephants to rest and finally got to our area where the Lions were and discovered a dead Giraffe which meant the Lion were successful and took the Giraffe down during the night. We had a decent view on the safari tour so we managed to get some decent photos. We also got the one Lioness with muddy paws walking around a bit and at the same spot Elephant, Buffalo and Zebra came to drink with the Lions looking on. We headed back to camp spotting a few animals along the way including a living Giraffe mother and baby.

We settled into some breakfast and then headed to the Cat rehabilitation center where we got to interact with Cheetah, Serval, Caracal and African Wild cat hands on. The are 4 endangered species of wild cat.

It was then time to return back to Hilltop camp for lunch. On route we spotted a huge herd of Elephants, Giraffe, Zebra and Buffalo. The next picture was amazing as we got this journey of Giraffe crossing the road in front of us and the one female began to groom herself and the stuck her tongue out at us as she was cleaning her nose! A Giraffe has a 45 centimeter long tongue for twisting around twigs to remove the leaves. This was a great sighting! It was now time for our Durban safari tour to head back to Hilltop camp for some lunch and we settled back into camp until 5 pm when we headed back out on safari to see what we could find.

At 5 pm we ventured out and we located a young Buffalo carcass but it was a couple days old and had been left which in Hluhluwe Imfolozi is usually a sign of a Leopards kill. As it was also close to the main road that was the verdict and sadly we didn’t see it.

We headed back to the Lions for another look which turned out to be a great look as they moved around a bit but also were now closer and in the open. We then raced back to Hilltop camp for some dinner and some rest before another early start the following day at 5am.

On our third day of our Durban safari tour we left at the crack of dawn and although we were 3rd in line to head out onto the reserve we took a quicker route to be the second vehicle back with the Lions giving us the ideal spot to enjoy these amazing animals.

We managed to watch the adult Lioness feeding on the Giraffe which was great. As we enjoyed this great sighting which is the sighting everyone want to see on a safari we managed to photograph a young male Lions yawning. This was amazing to see his teeth! It was time to continue with our Durban safari tour and we made our way into another area we had yet to visit and it was here we found Black Rhino which for me is almost as good as finding a Leopard! We had a great time waiting on this Black Rhino and her calf before we decided to move on to find more Giraffe and Zebra as well as some Elephants! It was not time to head back to Hilltop camp and have some breakfast before we would depart for St Lucia – Isimangaliso Wetland Park. We arrived at the St Lucia estuary and had a great time with the two hour boat cruise watching Hippos in the Estuary. We also had an amazing cloud formation which I had to take a picture of as it was just so beautiful. We then made our way to the town of St Lucia and settled into some lunch before beginning our drive back to Durban. It had been an amazing 3 days of Safari tour and my client as well as myself were very happy with how it went.

Durban safari tour; 4 of the Big 5 Durban safari tour; 4 of the Big 5

Why not join Tim Brown Tours for you Safari experience from Durban South Africa?

Click the below links to view the relevant social media page!