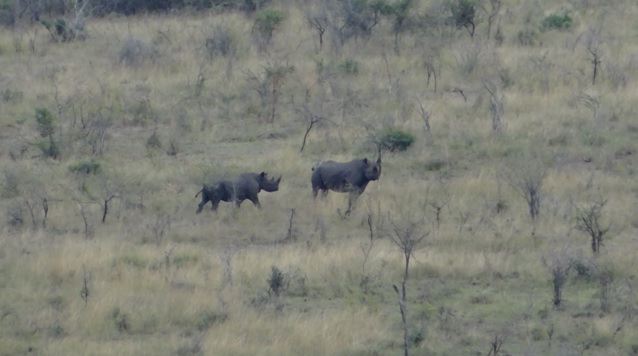 I met my clients at the Sibaya lodge in Durban for their Durban day safari with me to Hluhluwe Imfolozi game reserve which is home to the Big 5.

We had some very funny weather on the drive up as it rain intermittently but through all of this I chatted to my clients about the history of Durban, South Africa and of course the world famous Hluhluwe Imfolozi national park.

I always try and cover as much as possible with the 2.5 hours I have on the drive up as it is very interesting on these Durban safaris to learn more about how each population group came to be apart of our wonderful country, South Africa.

On a day safari we generally have limited time so I tend to really get as much out as possible. Everyone seemed to enjoy the interaction through the day and we were very luck with amazing sightings.

Arriving at Hluhluwe Imfolozi around 09:30 for our Durban day safari and we spotted some Buffalo on a hill near the gate. We also spotted Black Rhino and Impala within about 10 minutes of driving. The Black Rhino is such a rare sighting and we also caught glimpse of a Anti-poacher watching them from a distance! Well yes – we had to deal with a bit of this as Hluhluwe Imfolozi is having the roads maintained. A GOOD THING!

And then we spotted some Rhino as well as Baboons. We continued with our safari from Durban and before we could cross the Umfolozi river we spotted some Impala as well as some Zebra. The Zebra are one of few animals which are known to bite and kick each other as well as predators. This Zebra was biting at the other.

Anyone for a Zebra Love Bite? We crossed the Umfolozi river and found no animals but it was beautiful. Making our way up to the Mpila camp we continued through after looking at the lovely array of horns they have on display there.

We stopped to assess the situation and it was a huge bull Elephant in Musth which was walking up the road. Someone said to us “a car was off the road because of the Elephant”.

It is very important that you come to game reserves with a guide who is experienced with animal behavior and can tell the signs of a stressed animal. This Elephant just had 6 x the normal level of testosterone running through his body as he was ready to mate with females, this does mean that he can be a lot more frustrated and aggressive.

We turned off the engine as this stresses animals further and the Elephant moved 10 meters off the road to feed. This allowed us to roll up to him and enjoy him for about 10 minutes before leaving. We then spotted the first casualty of the day!

Car scared off the road by an Elephant This rental cars driver could not handle the stress and was obviously to close to the Elephant and reversed his car off the road… Next time keep your distance or come with a guide.

I later hear that the same Elephant has pierced a cars with his tusks and shoved it off the road… he had also pushed over a Knob Thorn over the road.

Anyway I think those people involved will come with a guide next time or will never come again. As we continued we had more sightings of Baboons and great sightings of Warthogs. These two male Warthogs were having a little fight over a lady. She decided after a few minutes to run off and leave them to it! Wow at this point all had gone so well and we had been having an amazing Durban day safari.

Next was the Male Impala with a Warthog in the same picture as they share habitat. I have forgotten that we actually saw a big male Giraffe just after the Elephant. This was amazing as he was right next to the road feeding. Every so often would lift his head up to look at us. We continued our Durban day safari and found a Crash of Rhino. The best part was it was a Male, his mother and her calf. What made it even better was that a Warthog was with them. Sometime on our safaris when we see Warthogs from a distance with Rhino I think it looks like a baby Rhino… This is all again that they share habitat and eat similar things like Grass. It was time to look at a view point over the river. In the reeds we spotted a good sized herd of Buffalo which then left the rivers edge and moved up into the grassy plains. It was here we got a good photo of them.

Herd of Buffalo on Safari in Durban We now had to make our way back up to the Centenary center where we would have some lunch and a look at the museum and craft market.

On route we had to drive around a tree the Elephant had pushed over and then we came across the big Rhino we had seen earlier laying at a pan. This Rhino we saw on our Durban day safari looked so cute! We then got back to the centenary center later than we had expected.

We managed to find another bull Elephant which was super relaxed feeding next to the road. We left the Elephant and found a big herd of Buffalo right near the road.They just stared at us – it was a great sighting. We maneuvered around took a few pictures before we realized we would have to leave for Durban. We turned around and made our way back to the gate. On route spotting the same Elephant walking down the road! Wow, what a great Durban day safari!

Departing the Hluhluwe Imfolozi game reserve we had smiles on our faces on route for Durban. We had enjoyed nature at its best and all have great memories from the day to take home with us. The rain came down. A fitting way for our safari to end with a blessing of water for the animals.

We arrived in Durban and said our farewells before I headed home.

P.S. Have you read our latest blog on Rhino Horn as medicine? Click this link!